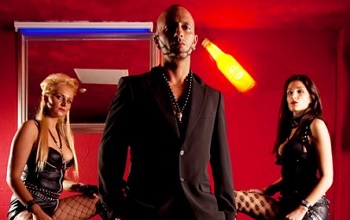 No doubt, the image and the name have been helpful in the success of 666, but in the long run it was the music which made the fans go crazy. lt’s a dance sound which had never been heard before – a bit harder than other and even a few steps back to the early techno sound, which was supposed to be dead. (Production: Thomas Detert and Mike Griesheimer)

ln addition to the singer’s voice going right through you and the musical gimmicks, making up the typical 666 sound, which was soon to be copied by many other producers.

Since 1997 the group has established themselves in the international dance music scene, despite their look and their name. Only a few of their successes to date:

They received several gold and platinum records all over the world..

Frontman Demon and the performing members of 666 always have a full tour schedule and they are strongly established in the international music business. They are one of the top acts from a squad of german-rooted acts which now in the 21’st century continues to have the most international success in the club scene.