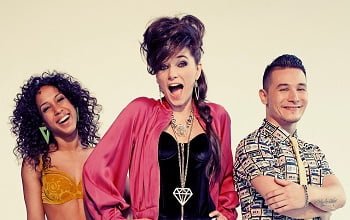 Alice DJ (NL)
Better Off Alone, Back in My Life, Will I Ever

Once upon a time not long ago, if you were in Europe, America or Asia, you could not listen to the radio or walk into a club without hearing Better off Alone, Will I Ever and Back In My Life.

It all started in 1999, when a group of Dutch young deejays and talented producers saw their free collaboration culminate into a project selling over one million albums and 5 million singles worldwide. The controversially titled album “Who Needs Guitars Anyway?” spawned no less than 5 international hits: Will I Ever (UK #7), The Lonely One (UK #16), Back in my Life” (UK #4), Celebrate our Love (UK #17) and Better Off Alone (UK #2). Other countries where Alice Deejay crushed the charts were Germany, France, South Africa, Australia, Sweden, Norway, Denmark, Belgium, Netherlands, Spain, Portugal and Canada.

In 2002 the energetic frontwoman Judy and the ‘behind the scene’ members of the group decided to call it quits. The hits of Alice Deejay though, never stopped being air- and clubplay favorites. Then, in 2013 something was in the air, Shakira called. She was working on her new album and wanted to record a new version Better off Alone. No less than one month later; David Guetta on the phone, who just finished recording ‘Play Hard’ Ne-Yo and Akon, requesting permission to include the ‘killer hook’ from ‘Better Off Alone’. Resulting in another worldwide smash for David and renewed attention for Alice Deejay.

So now what.. Alice Deejay is back in business with a new voice and face, Amsterdam DJ and singer Ilona, managed by.. the founding fathers of the group, so it’s all in the family. Oh, and a slightly abbreviated name.. Alice DJ. Available for 100% live-shows featuring the original Alice DJ hit singles and with powerful medleys and live mashups celebrating the best dance hits of the 90’s and 00’s.