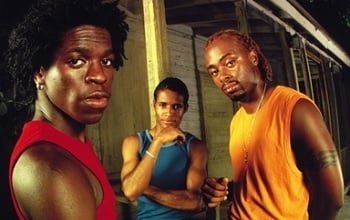 Baha Men (BS)
Who Let the Dogs Out?, You All Dat, Move It Like This

The Bahamian music and dance tradition of Junkanoo, which traces back to the slavery days when slaves were allowed to gather together one day a week for festivities, is fused with the modern influences of dance rhythms, pop music and Latin percussion by Isaiah Taylor and his band, The Baha Men. According to “Billboard”, the group “straddles the line between Caribbean and western popular music and does so while putting smiles on people’s faces and a bounce in their steps”.

Although their debut album, “Junkanoo”, released in 1979, was heavily rooted in the Junkanoo style and featured updated versions of traditional Bahamian tunes, The Baha Men have increasingly leaned towards modern music. Their second album, “I Like What I Like”, was produced by Tommy D (Michael Jackson), Don Dubose, John Holliday and Trevor Steele (The Escape Club) with Holliday and Steele co-writing five songs with the band. The first single from the album was “That’s The Way, Etc.”, a medley of tunes by K.C. And The Sunshine Band. The Baha Men continued their more-contemporary approach with their third album, “Doong Spank”, released in 1999. Who Let the Dogs Out, featuring the Grammy-winning single “Who Let the Dogs Out,” was issued a year later. The album went on to sell over five million copies. In early 2002, the Baha Men attempted for more Top 40 stardom by issuing the follow up, Move It Like This. ~ Craig Harris