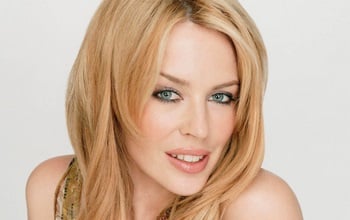 Kylie Minogue (AU)
I Should Be So Lucky, Je ne sais pas pourquoi, Especially for You (w/ Jason Donovan), Can’t Get You Out Of My Head

“I had what I can only describe as an epiphany,” Kylie begins, as her 12th studio album Kiss Me Once takes up residence in charts around the world. “I saw a horizon and for the first time I could remember, there was nothing on it. I knew I could make some changes, and I knew I needed to make changes. Big changes.”

Back in 2012, Kylie Minogue marked a quarter of a century in pop with K25, a twelve-month-long series of events, releases and retrospectives that included two albums, a book celebrating two and a half decades’ varied fashion endeavours, a tour, and a surprise single release in the shape of Timebomb, which became her 44th Top 40 hit. Then there were two films, a box set that took in every one of her 45 singles, from I Should Be So Lucky through Better The Devil You Know to Confide In Me, Can’t Get You Out Of My Head and I Believe In You, then finally Timebomb itself. Having also performed at events as diverse as The Queen’s Diamond Jubilee and the Sydney Mardi Gras, Kylie finished off 2012 by taking the stage at London’s O2 to perform Especially For You with Jason Donovan for the first time in two decades.

If that year’s events make for exhausting reading, the curating process Kylie oversaw was something else. It was, she says now, a bit like a trip to the bottom of the garden. “Do you have a shed where you store everything?” she asks. “You go there for one thing, and the next thing you know you’re sidetracked, you’re going through all your stuff and emotionally pummelled.” This feeling was particularly acute when 25 years of imagery flashed before her eyes for the Kylie / Fashion photo book. “I was seeing pictures of this young girl. Like anyone would, I felt nostalgic. But I also felt that I wish I could have told her the things it took me a long time to learn. Finally, there were feelings of pride, and also wonder, thinking: ‘Did I really do that? Wow, how DID I do that?’”

Then, when K25 was all over, Kylie saw that empty horizon and made a change. Significantly, she parted ways, on the very best of terms, with the manager who’d overseen her career since she invaded millions of living rooms in a pair of dungarees. For an artist who never stopped working, that void should have been scary. “Actually, it felt like an enlightened moment,” Kylie smiles. “I felt really calm, because the clarity was there. I’ve never had anything like that before. I may never have it again. But there it was.”

One thing Kylie did know was that she was done with retrospectives. “K25 was great to celebrate and reflect,” she admits, but afterwards she knew that making a career out of looking back – understandable for any artist with 25 years under their belt – just wasn’t for her. “I thought, ‘I’m not ready to be that. I’m not ready to be a heritage artist. That can happen in another 20 years.’” In the spirit of looking forward she signed with Roc Nation management, and doors were suddenly unlocked. ‘Kiss Me Once’, bursting with pulsing synths, sweeping strings, a distinctly romantic energy and a huge amount of self confidence, is the sound of those doors being kicked wide open.

Early on in the sessions Into The Blue, which became the album’s lead single, quickly established itself as this new album’s lightning rod. “When I recorded it, I was at the start of something new,” Kylie recalls. “I did feel as if I was launching myself into the blue. I was very, very aware of where I’ve been, and I was being realistic about where I think I am in my life and my career, and I was accepting of that. I was moving forward: business wise with management, but on a personal level it resonates even deeper. The song was quite magical for me.”

One of the new doors that opened led to the recording studio of Pharrell Williams, a man whose own renaissance strikes a similar chord to Kylie’s own resurgence at the beginning of the 2000s. “He’s always been it for me,” she smiles. “I wanted to work with him years ago and that didn’t happen, and that’s a bonus of being with Roc Nation, they can just put in a phone call.” The studio setup was, at first, quite alarming. “I prefer keeping it simple but he had loads of people around. Next thing you know, Miley Cyrus has rocked up, showing us her first twerking iPhone video. She was like, ‘Hey, you should do one of these’. I was like, ‘Perhaps not’.”

Pharrell’s direct hitmaking sensibility (“he literally sits with his synthesiser, puts all the beat in, adds chords, writes it, you sing it and it’s done”) may have been the perfect manifestation of Kylie’s empty horizon epiphany, but as doors continued to open, album sessions looked in danger of spiralling out of control. True to her new ideology, Kylie seized control and once again found clarity, this time in the form of songwriter Sia Furler. “I’d done two sessions with her,” Kylie remembers. “On the third session in LA I asked her if she would come on board and executive produce the album and be my partner.” Sia, at this point, had recently become the world’s hottest go-to hitmaker. “I honestly didn’t know what she would say – but she said yes straight away. We jumped up and down and hugged and I was very happy.”

Sia’s perspective on the sprawling sessions resulted in some unexpected feedback: there wasn’t an album here. By Sia’s reckoning, there were at least four. “Sia said there was a pop album, a more indie-leaning album, another album which was more of an EDM type of affair, plus one which I suppose you could loosely describe as ‘urban’ – although I say I’m not remotely urban. I’m suburban. Maybe my next few years are going to be quite easy: I’ve done all the hard work, now I’ve got a few albums in the bank!”

As Kylie’s fans, peers and even critics know all too well, the chance of Kylie putting her feet up for more than a year is fairly remote. For a start there’s this winter’s 33-dates-and-counting Kiss Me Once tour, which Kylie’s already looking forward to. “Songs become fleshed out when you perform them live,” she explains, “so it’s a really exciting time. It’s not like living in the studio, listening to songs a trillion times on my laptop; it becomes a very different experience when first I get to release them, then later on perform them live. It’s like you let them go – you allow them to fly away and fulfill their intended purpose.”

With the success of Kiss Me Once it feels, just like it has felt during all the best bits of Kylie’s extraordinary career, that Kylie is completely comfortable with who she is as a person, where she is in her career and what she is as a pop entity. Kylie’s been present in the lives of so many for so long, with so many different pockets of fans around the globe each with their different expectations, that one might excuse Kylie if she focused on just one area of her work. But early feedback for Kiss Me Once suggests that she might have pulled off something of a modern pop miracle: keeping everyone happy, not least herself. “It took me a long time to realise that what I am is a number of things,” she says now. “And it took a lot of hard work to get to the stage where people would allow me to be all those things. The idea that if you’re one thing, you can’t also be another: I just didn’t get it. If someone asked me to choose which Kylie to be, I’d have to choose the Kylie I am: every Kylie. I’m not doing anything by halves at the moment.”

In the spirit of not doing things by halves, in 2013 Kylie signed up for the 2014 run of BBC One’s The Voice, thrusting herself back into British living rooms. It’s a show with whose premise she half agrees. “For any artist the voice is important,” she says, “but when it’s past that stage of concentrating on a voice, it’s no longer about one thing – it’s about everything. I mean, maybe they wouldn’t have turned their chairs around for me if I was brave enough to go on that show when I first started out – but hey, I did okay.”

68 million record sales later Kylie has, indeed, done okay: proof of one of pop’s more intense ironies, that those who feel least certain of future success frequently enjoy lengthier careers than those whose music is self-consciously designed to last. “I didn’t even think about longevity at the beginning,” Kylie recalls. “I was just happy and probably quite stunned that I was in the music industry at all. It took me a long time to really, truly believe I was part of it.”

In 2014, with Kiss Me Once reinforcing her reputation as one of the defining stars of the modern pop era, Kylie’s such in integral part of the fabric of pop that it’s hard to imagine the place without her. That trip to the emotional garden shed back in 2012 might have allowed Kylie to take stock of her achievements to date, but K27 has all the signs of being Kylie’s best year yet.