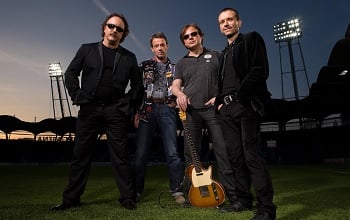 Opus (AT)
Live Is Life, Flyin’ High, Faster And Faster

Another standout track from Opus was the power ballad “Flyin’ High,” a live version of which appeared both on the Live is life album, and on their successful US release, Up and Down. At a concert in the mid-1980s, fellow Austrian rock star Falco joined Opus on stage for a rendition of “Flyin’ High.”