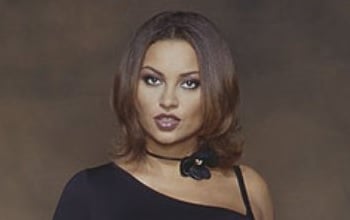 Anita Doth (2 Unlimited)
No Limit, Get Ready For This, Tribal Dance, Twilight Zone, Nothing Like the Rain, Ain’t Gonna Wait On Love

Anita was born on the 28th of December 1971 in Amsterdam. Her family’s origins are in Surinam, a former Dutch colony. Lydia, her mother, had also another daughter. Before starting her musical career, she had a job as a secretary at a Dutch police station, in the parking ticket division. It wasn’t long after that when she was tapped to join Trouble Sisters, an all-female rap group. Then Marvin D asked Anita to join his group as a dancer and backup singer. ‘It was my first taste of show business’ said Anita of the job. But she was soon tired of ‘standing around just looking sexy’. She wanted to perform. Marvin asked her if she’d like to make a record. He said a friend of his (Ray) was doing a project and needed a female singer. ‘Of course, I said yes”, and what happened then was nothing short of history. 2 Unlimited was born. Ray and Anita didn’t really know each other before the group was formed, although they had seen each other at clubs. In 1996 it all came to an end. Their contract ended and they both decided not to extend it for another 5 years. After they left 2 Unlimited, they were going to call themself the A & R Foundation or just simple Ray & Anita. Many record companies offered them a lot of money to go on together, but because Anita wanted to do more dance stuff and Ray wanted more Hip Hop/R& B they decided not to go on together.

Anita is currently busy with her own production company. She used to have her own dance program on The Music Factory, a Dutch music television station. She has appeared as a guest vocalist on dance singles like That’s When I Stop Loving You by Dutch artist Rene Froger. There was also a project for a telefilm on Dutch TV. In 1999 she released a solo single entitled Center Of Your Universe and not the title track of her show called Welcome 2 The Pleasure Zone. She had a modest success with her second solo single Lifting Up My Life, released in Holland. Anita is convinced she can manage herself as a solo singer, and achieve success all by herself. In 2000 she finally released her first solo album, Reality. She wrote most of her songs together with producers Steve Mac, Todd Terry (who also wrote songs for Jocelyn Brown ) and Adamski… Recording sessions for the album took place in Amsterdam, London and New York. The album contains tracks with elements from UK dance, pop, drum ‘n’ bass and even chemical beats. Anita chose to work with different producers for good reasons. “With 2 Unlimited we used to work with just one producer, which pins you down on just one type of sound. I didn’t want that to happen this time around. The track Adamski produced sounds very mysterious, while Todd Terry created a very groovy sound. The variety of sounds we created that way, works surprisingly well.” Musically, Anita chose a new direction, partially breaking free from her past. “The songs still sound very accessible and are very danceable, which also applies for 2 Unlimited-material. They’re nice pop songs, but the basis of this record were influences from different kinds of modern day dance styles for instance”. “It turned out to be a diverse record”, she says “This album really is my personal thing. This is the music I like myself. From now on, I just want to find out what I’m capable of”. She adds “‘I want to stay who I am. I haven’t seen it all… no way. I want to prove to myself I can do it on my own, too. That’s a huge challenge for me. As a solo singer, I haven’t proved anything yet. People still see me as ‘Anita from 2 Unlimited’. I can imagine that, but I hope it’ll change. Hopefully people will start seeing me as Anita.”

Ask the price of Anita Doth and availability for free info@room5.fi