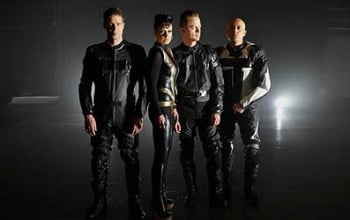 Aqua is without a doubt the world’s most famous Bubblegum dance act. They were the first to make worldwide recognition, have sold the most albums, and are the most successful band ever in Denmark.

Coming from Denmark, the group is made up of Søren Rasted, Lene Nystrøm Rasted, René Dif, and Claus Norreen. Lene and René are the two vocalists, and Søren and Claus are the main song writers and producers. Aqua is best-known for their 1997 single “Barbie Girl”. They formed in 1994, and achieved huge success across the world in the late 1990s and early 2000s. Although often criticised by the media, the group managed to top the United Kingdom singles chart with their first three singles, a feat few artists have achieved. The group released two albums, Aquarium in 1997 and Aquarius in 2000, before finally splitting up in July 2001.

The group sold an estimated 28 million albums and singles (see the discography section for more information), and in their prime, Aqua managed to make the singles chart top ten in a number of countries where European pop acts would not normally succeed, including the United States, Australia and Japan. Aqua is also listed in the Guinness Book of World Records for the huge amount of concerts and interviews they have given (2300 interviews and 220 concerts).

Following their split in July 2001, the members of Aqua went on to pursue solo careers. Søren and Lene were married, Søren started up a new experimental musical project called “Lazyboy”, and Lene began her career as a solo artist. Both Rene and Claus also began a solo career, as a solo artist and producer. In October 2007, Aqua reunited , and plan to release more material in the future.

2009 was a special year for Aqua: they release a brand new single “Back To The 80’s” and a new Greatest Hits album. In 2011 they released their third studio album with an updated style, “Megalomania.”