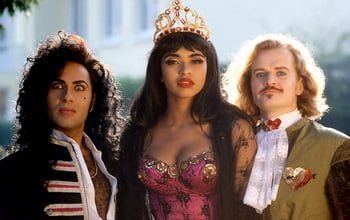 The flamboyant multicultural Swedish dance-pop group Army of Lovers formed in 1987, the brainchild of composer and producer Alexander Bard. Five years earlier Bard first emerged as a member of the short-lived trio Baard, best known for the single “Life in a Goldfish Bowl.” In 1985 — in drag, no less — he led Barbie, a band also comprised of hairdresser Jean-Pierre Barda (alias Farouk), Yazmina Chantal, and model Camilla Henemark (aka Katanga); two years later, Bard, Barda, and Henemark (now performing under the name La Camilla) founded Army of Lovers, taking the name in honor of the 1970s cult movie Armee der Liebenden.

With the aid of designer and stylist Camilla Thulin, the group created an outrageously campy image, the bandmembers’ wardrobe drawing heavily on religious imagery while also referencing history and folklore. Army of Lovers debuted in 1988 with the single “When the Night Is Cold,” followed by the more dance-minded “Love Me Like a Loaded Gun.” After scoring a 1989 hit with “Supernatural,” the following year they issued their debut LP, Disco Extravaganza (issued in the U.S. as Army of Lovers). Released in 1991, Massive Luxury Overdose, recorded with producer Anders Wollbeck, was their breakthrough; in tandem with a pair of lurid videos, the singles “Crucified” and “Obsession” became club hits, and Army of Lovers became major stars in their native Scandinavia and throughout Eastern Europe.

In the wake of the record’s success, however, La Camilla was fired and replaced by model and school teacher Michaela Dornonville de la Cour, who debuted on the single “Judgment Day.” After recording music for the soundtrack to the film Ha Ett Underbart Liv, Army of Lovers recruited former phone-sex operator Dominika Peczynski and released 1993’s The Gods of Earth and Heaven; the single “Israelism” became the subject of considerable controversy when it was accused of mocking Jewish culture, but ironically rose to the number one spot on the Israeli pop charts. After 1994’s Glory Glamour and Gold, de la Cour exited, paving the way for the return of La Camilla prior to the release of 1996’s Les Greatest Hits. With Army of Lovers on hiatus, Bard formed a new group, Vacuum, and issued 1997’s The Plutonium Cathedral; La Camilla, meanwhile, mounted a solo career. ~ Jason Ankeny