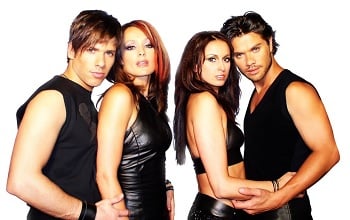 ATC was a euro-trance project directed and produced by Alex Christensen (U 96, Rollergirl…) in Hamburg, Germany. ATC means “A Touch Of Class”. Members were Joe Murray (born July 5th 1974 in Christ Church, New Zealand), Tracey Elizabeth Packham (England), Sarah Egglestone (born in Warrandyte, Australia) and Livio Salvi (born January 25th 1977 in Italy). Most of them had already worked together in the music Cats, and were discovered by Thomas M. Stein.

Their first single Around The World (La La La La) was an instant hit : it stayed #1 during 7 weeks in the German Charts and was played 1500 times in one week on German radio. It peaked # 1 in Israel and # 15 in UK. It sold gold in France. Around The World was actually a cover of a Russian song called Pesenka released in 1998 by the project Ruki Vverkh (Hands Up in English), and which had already been a big hit in there homeland. The video was shot at the basement of the International Congress Centre in Berlin. ATC released their first album Planet Pop, recorded at Rosengarten Studios and Kingsize Studio, in February 2001. It was renamed A Touch Of Class for the Canadian market. ATC received an ECHO for Best Dance Act.

The follow-up to Around The World was entitled My Heart Beats Like A Drum. It was also very successful. The video was shot in August 2001 at the Cinelicht studios in Hamburg. The following single Thinking Of You was shot in a castle in England. For this single they used a sample from Jacki Graham’s 1986 hit Breaking Away. ~ Drago Bonacich