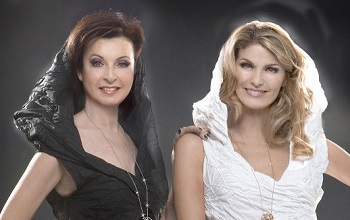 Spanish flamenco artists Mayte Mateus and Maria Mendiolo were already performing together in 1977 for tourists when they were snapped up by RCA exec Leon Deane. Named Baccara, the duo partnered with Rolf Soja, who penned their debut, “Yes Sir I Can Boogie.” Released in the middle of 1977, the song rocketed up the U.K. charts, scoring the band a number one in September. On the strength of that song, their self-titled debut album was an instant success, and a further follow-up single, “Sorry I’m a Lady,” gave the duo another U.K. hit in early 1978. Touring Europe brought Baccara a larger fan base and even wider audience for their follow-up albums. Light My Fire was released in 1978 and spun off several singles, including “La Bamba” and “Parlez-Vous Français?” The latter, of course, was their entry for that year’s Eurovision Song Contest, where they represented Luxembourg. A hot property, Baccara found themselves on the European and U.K. television circuit, appearing on Germany’s Musikladen and on England’s Sacha Distel Show as regular guests while their disco was in fashion.

The band released just two more albums, Colours in 1979 and Bad Boys in 1981. The hit process continued in their native Spain, Germany, and Japan during these three years, although Britain considered them little more than one- or two-hit wonders. Indeed, their final album as Baccara didn’t even see release in that country. By the time Bad Boys hit the racks, both Mateus and Mendiolo were increasingly focusing on their own solo ventures and, by 1983, the original incarnation of Baccara had split. However, by the middle of the decade, both women were leading their own versions of the band — Mendiolo as Baccara paired with Marissa Perez, and Mateus as New Baccara, first with Jane Comerford and later with Gina T. It was the Mendiolo/Perez duo that emerged triumphant heavy-hitters on the HI-NRG scene during the late ’80s, releasing a string of club hits — “Touch Me,” “Fantasy Boy,” and “Call Me Up” — that culminated in the confusingly titled New Baccara’s Fun, Fun, Fun LP in 1990 (the album also included a new version of “Yes Sir I Can Boogie”).

Both versions of Baccara continued to record and perform throughout the ’90s, with a cover version of “Wind Beneath My Wings” a massive U.K. club hit, while various hits packages have been released without any real distinction between the two bands. Indeed, in the late ’90s, New Baccara dropped the first word from their name, again becoming Baccara. A hits package, Baccara 2000, was released in 1999. ~ Amy Hanson