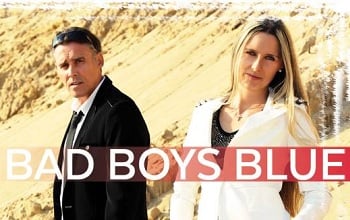 Bad Boys Blue (DE)
Lady In Black, You’re a Woman, Come Back And Stay, A World Without You, I Wanna Hear Your Heartbeat

The first single of the group called “L.O.V.E. In My Car” was released in autumn 1984. It did very well in the discos and clubs, but it didn’t get to the charts at all. It was the first, but also the last single track which Andrew sang lead on, cause producers wanted Trevor Taylor to sing the lead vocal in other tracks.

1986 brought another two hit-singles: “Kisses And Tears (My One And Only)” (Germany #22, Switzerland #26) and “I Wana Hear Your Heartbeat (Sunday Girl)” (Germany #14, Switzerland #21). The both singles promoted the second album called “Heartbeat”, which except typical BBB tracks contained two covers: “Love Really Hurts Without You” (originally performed by Billy Ocean) and “Baby I Love You” (originally performed by Phil Spector). The first of them was even released as the next single, but it didn’t achieve the success.

In 1987 was released the single “Gimme Gimme Your Lovin’ (Little Lady)”, which discovered the next album. It was a typical BBB track sung by Trevor, so it didn’t surprise the fans at all. At that time no-one could suppose what changes in the group will be caused by “Come Back And Stay” – a song which was chosen to be released as the next single. It was the first track which John sang lead on and its big trump were female parts sang by Lyane Leigh. The single did very well in the charts – Germany #18. In June was released the 3rd album called “Love Is No Crime”, where except Trevor, also John was a lead singer.

1988 brought the next album titled “My Blue World”. It was promoted by three singles: “Don’t Walk Away, Suzanne” (Germany #44), “Lovers In The Sand” (Germany #42) and “A World Without You (Michelle)” (Germany #17). The remixes of the last two singles were also released as special limited editions. Almost all of the songs from the new album were sang by John. Trevor only sang two tracks lead on: “Bad Reputation” and “Love Don’t Come Easy”. This situation surely had an influence for the relations in the group. It was obvious that Trevor felt not comfortable staying in the background. In 1988 was also released the first compilation of the group called “Bad Boys Best”, which included all the hit singles as well as a brand new track titled “Hungry For Love”. It was also the next single released in two versions (Germany #26). Trevor Taylor decided to leave the group at that time and has continued his career in other groups – “Street Noise”, “Ozazuvas”, “Supa T.” and “Umoya”.

The group quickly found a new member named Trevor Bannister (born August 5th, 1965, Grembsby, England). In 1989 that crew released two singles: “Lady In Black” (Germany #16) and “A Train To Nowhere” (Germany #27). The both tracks promoted the new album called simply “The 5th”. Also in 1989 was released the compilation “Super 20”.

“Game Of Love” was the name of the next album released in 1990. The album was promoted by three singles: “How I Need You” (Germany #33), “Queen Of Hearts” (Germany #28) and “Jungle In My Heart” (Germany #41). Also in 1990 was released the special single called “The Official Bootleg Megamix vol.1” and the VHS cassette “Bad Boys Best” containg videos of the group.

In 1991 was released the single “House Of Silence”, which discovered the new album under the same title. Though there were plenty of good tracks on it, the record company decided to not promote it with the next singles.

In 1992 was released the next album “Totally”, which was promoted by three singles: “I Totally Miss You”, “Save Your Love” (Germany #16, USA #89) and “A Love Like This”. The first two singles were released in the U.S. as special editions containg some new remixes. In 1992 was also released the next compilation called “More Bad Boys Best”. The item included the best tracks from 1989-1992, but also some rarities previously unreleased: the new version of “Kiss You All Over, Baby” sung by John, the live version of “Lady In Black” and the special remix of “You’re A Woman” sung by John McInerney and Trevor Bannister.

1993 was another turning point in the career of the group. Then was released the single “Kiss You All Over, Baby” (the version was taken from “More Bad Boys Best” compilation), which promoted the new album titled “Kiss”. It was really particular item as it included 6 brand new tracks, the new versions of “Kiss You All Over, Baby” and “I Live”, the original version of “Kisses And Tears (My One And Only)”, the new remix of “I Totally Miss You” and spanish version of “Save Your Love” called “Aguarda Tu Amor”. Also in 1993 were released two compilations: “Dancing With The Bad Boys” and “Bad Boys Blue” (only in the U.S.). Though the group had many successes at that time, Trevor Bannister decided to leave. Then John and Andrew decided to leave Coconut Records and signed to the new label called Intercord. In 1993 BBB toured in Africa with the additional singer named Owen Standing. The guy has never become the official member of the group as the ex-label of the BBB – Coconut Records, offered him a solo contract. John and Andrew decided to continue as a duet.

In 1994 was released the single “Go Go (Love Overload)”, which promoted the totally new album titled “To Blue Horizons”. The item was promoted by two more singles: “What Else?” and “Luv 4 U”. In the U.S. was released the special edition of the album including two bonus tracks: “Family Beat” and “Don’t Be So Shy” (the B-sides of the last two singles). Meanwhile Coconut Records released the compilation “You’re A Woman”, the single “Dance Remixes” and the album “Completely Remixed” containing new remixes of the greatest hits.

In June 1995 was released the single “Hold You In My Arms” recorded with a new member of the group named Mo Russel (born March 15th, 1956, Aruba, Caribbean Sea).

In 1996 was released the next album “Bang Bang Bang”, which was promoted by one more single called “Anywhere”. Unfortunately, neither the both singles nor the album didn’t achieve the success.

In 1997 the boys didn’t work in the studio, but in March 1998 they signed to Coconut Records and released the single “You’re A Woman’98”. The new version of the old track did well in the charts and was very successfull (Finland #17, Germany #52). In summer the group released the new album called “Back” (Germany #28). The item included eight new remixes of the well known hits, the special megamix and seven brand new tracks. The new versions were mostly produced by Andy Matern and Christoph Schick. A few new tracks were written and produced by a well known german composer and producer, David Brandes (Bros Music). The album was promoted by three more singles: “The Turbo Megamix” (Finland #8, Germany #73), “From Heaven To Heartache” and “The Turbo Megamix Vol.2”. Also in 1998 was released the compilation “With Love From Bad Boys Blue… – The Best Of The Ballads” and the VHS cassette “Bad Boys Best’98”.

In February 1999 were released two singles: “Hold You In My Arms’99” (by Intercord) and “The-Hit-Pack”, which promoted the new album called “…Continued” (Germany #38). Similar to “Back” also this item included a couple of new tracks as well as new versions of well known hits. In May 1999 was released the compilation “Pretty Young Girl” and in September another new album titled “Follow The Light” (Germany #80). It was also the last album recorded with Mo as he decided to leave the group in the end of the year.

May 29th, 2000 was released the single “I’ll Be Good”. It discovered the next album called “Tonite” which was released in July. Though such tracks like: “S.O.S. For Love”, “I Wanna Fly” or “Do What You Do” were potential hits, the record company decided to not promote it with the next singles.

In July 2001 was released the next compilation called “Bad Boys Best 2001”. Except the hits taken from the last four albums, the item included two brand new tracks: “Don’t Want Your Love” and “Sweet Little Things”. Also in 2001 the contract between Coconut Records and the group has ended.

In summer 2002 the group signed a deal with David Brandes (Bros Music) and in September they started working on their next album.

July 7th, 2003 was released the single “Lover On The Line” (Germany #72), which promoted the new album titled “Around The World” (Germany #43), released August 4th. The single as well as the album were released by Koch Universal. In 2003 were also released two compilations: “In The Mix” and “The Stars Of The XX Century – Greatest Hits” (only in Poland).

In January 2005 took place the last concert of original line-up as Andrew Thomas decided to leave the group. In February of 2005 John was joined by Sylvia McInerney (born August 15th, 1979, Poland) and Edith Miracle (born August 15th, 1979, Poland) and spent next months touring in Germany, USA, Russia and Turkey performing along with a live group. In 2005 was released the first DVD of the group titled “1985 – 2005 | Video Collection”, the compilations: “Hit Collection vol. 1 – You’re A Woman”, “Hit Collection vol.2 – The Best Of”, “Greatest Hits Remixed”, “Hungry For Love”, “Greatest Hits” (2 CD) and re-edtions of the two earlier compilations: “Completely Remixed” and “Dancing With The Bad Boys”.

The next album of the group produced by french producers: Johann Perrier and Antoine Blanc (MS Project) titled “Heart & Soul” was released on June 13th of 2008. It was discovered by single “Still In Love” (released on May 20th of2008), that included a couple of modern remixes produced by Almighty, Alex Twister & DJ Elkana/DJ Moraz. In October 2008 was released brand new compilation of Bad Boys Blue titled “The Single Hits (Greatest Hits).

“Queen Of My Dreams” was released as digital single in May 2009.

On October 30th of 2009 Coconut Music/Sony Music released a particular compilation titled “Unforgettable”, dedicated to Trevor Taylor & Andrew Thomas – original members who passed away in 2008 and 2009.

In September 2011 John has made the decision to finish working with Carlos.

In October 2011 the group was joined by Kenny “Krayzee” Lewis, known from collaboration with C.C.Catch, Touché and Mark ‘Oh. Late in the year 2011 John has made the decision to finish working with “Krayzee”.

Bad Boys Blue are still carrying on leaded by John McInerney (the only remaining original member and lead singer of the group since 1987) and two female backing singers: Sylvia McInerney & Edith Miracle. The group is still performing on many shows in such countries as Germany, Poland, UK, Finland, Israel, Russia, Romania, Hungary, Estonia, Lithuania, Latvia, Ukraine, Kazakhstan, Turkey, USA and many others.