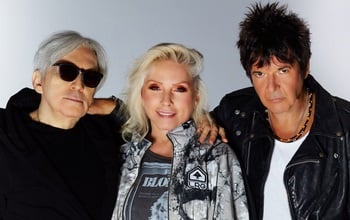 Blondie (US)
Heart of Glass, Call Me, Atomic, Maria, The Tide is High

Embracing a broad range of pop music that encompassed British Invasion rock, garage rock, disco, reggae, Latin rhythms, and hip-hop, Blondie was the most commercially successful band to emerge from the New York punk/new wave community of the late ’70s. The group was formed in New York City in August 1974 by singer Deborah Harry (b. July 1, 1945, Miami, Florida), formerly of the folk-pop group Wind in the Willows, and guitarist Chris Stein (b. January 5, 1950, Brooklyn, New York) out of the remnants of Harry’s previous group, the Stilettos. The lineup fluctuated over the next year; drummer Clement Burke (b. November 24, 1955, New York) joined in May 1975, and bassist Gary Valentine signed on in August, while keyboard player James Destri (b. April 13, 1954) came on board in October, completing the initial permanent lineup. One of the first bands on the CBGB scene to score a record deal, Blondie released their first album, Blondie, on Private Stock Records in December 1976. In July 1977, Valentine was replaced by Frank Infante.

Plastic Letters In August 1977, Chrysalis Records bought Blondie’s contract from Private Stock and in October released their second album, Plastic Letters. (Chrysalis also reissued the debut LP.) Blondie expanded to a sextet in November with the addition of bassist Nigel Harrison (born in Princes Risborough, Buckinghamshire, England), as Infante switched to guitar. Blondie broke commercially in the U.K. in March 1978, when their cover of Randy & the Rainbows’ 1963 hit “Denise,” renamed “Denis,” became a Top Ten hit, as did Plastic Letters, followed by a second U.K. Top Ten, “(I’m Always Touched by Your) Presence, Dear.” Blondie turned to U.K. producer/songwriter Mike Chapman for their third album, Parallel Lines, which was released in September 1978 and eventually broke them worldwide. “Picture This” became a U.K. Top 40 hit, and “Hanging on the Telephone” made the U.K. Top Ten, but it was the album’s third single, the disco-influenced “Heart of Glass,” that took Blondie to number one in both the U.K. and the U.S. “Sunday Girl” hit number one in the U.K. in May, and “One Way or Another” hit the U.S. Top 40 in August. Blondie followed with their fourth album, Eat to the Beat, in October. Its first single, “Dreaming,” went Top Ten in the U.K., Top 40 in the U.S. The second U.K. single, “Union City Blue,” went Top 40. In March 1980, the third U.K. single from Eat to the Beat, “Atomic,” became the group’s third British number one. (It later made the U.S. Top 40.)

Autoamerican Meanwhile, Harry was collaborating with German disco producer Giorgio Moroder on “Call Me,” the theme from the movie American Gigolo. It became Blondie’s second transatlantic chart-topper. Blondie’s fifth album, Autoamerican, was released in November 1980, and its first single was the reggae-ish tune “The Tide Is High,” which went to number one in the U.S. and U.K. The second single was the rap-oriented “Rapture,” which topped the U.S. pop charts and went Top Ten in the U.K. But the band’s eclectic style reflected a diminished participation by its members: Infante sued, charging that he wasn’t being used on the records, though he settled and stayed in the lineup. In 1981, the members of Blondie worked on individual projects, notably Harry’s gold-selling solo album, KooKoo. The Best of Blondie was released in the fall of the year. The Hunter, Blondie’s sixth album, was released in May 1982, preceded by the single “Island of Lost Souls,” a Top 40 hit in the U.S. and U.K. “War Child” also became a Top 40 hit in the U.K., but The Hunter was a commercial disappointment, as was the concert tour that followed.

No Exit By the time The Hunter was completed, Stein became seriously ill with the genetic disease pemphigus. As a result, Blondie quietly broke up in October 1982, with Debbie Harry launching a part-time solo career while caring for Stein, who eventually recovered. In 1998, a new Blondie lineup anchored by Harry, Stein, Destri, and Burke united to tour Europe, their first series of dates in 16 years; a new LP, No Exit, followed early the next year. After more touring, another studio set, The Curse of Blondie, followed in 2003, and a DVD of the Live by Request program from A&E was released in 2004. In 2006, Blondie celebrated their 30th anniversary with their induction into the Rock & Roll Hall of Fame and the release of Greatest Hits: Sound & Vision, a best-of collection that contained all their classic videos as well. Blondie got back to work on original material in October 2009, decamping to upstate New York to start recording a new studio album. Additional sessions were held in Hoboken, and the resulting Panic of Girls was released in July 2011. In 2013, Blondie set out on a concert tour with another iconic female-fronted band, X, and returned to the recording studio to work on a new studio set, which was released in 2014 as Ghosts of Download. Three years later, Blondie teamed with producer John Congleton for Pollinator, which featured songs and cameos from the likes of Charli XCX, Nick Valensi of the Strokes, Sia Fuller, Blood Orange, Dave Sitek, and Johnny Marr. ~William Ruhlmann