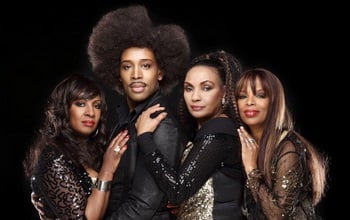 Although they never had much success in America, the Euro-disco group Boney M. were a European phenomenon during the ’70s. After German record producer Frank Farian (born in 1942) recorded the single “Baby Do You Wanna Bump?” (which was successful in Holland and Belgium), he created Boney M. to support the song, bringing in four West Indian vocalists who had been working as session singers in Germany — Marcia Barrett (b. October 14, 1948, St. Catherines, Jamaica), Liz Mitchell (b. July 12, 1952, Clarendon, Jamaica), Maizie Williams (b. March 25, 1951, Monserrat, West Indies), and Bobby Farrell (b. October 6, 1949, Aruba, West Indies, d. December 30, 2010, St. Petersburg, Russia). “Daddy Cool” reached the U.K. Top Ten in February 1977, followed in April by a remake of Bobby Hebb’s “Sunny.” In July, “Ma Baker” just missed the U.K. number one spot, and “Belfast” hit the Top Ten in December. In 1978, Boney M. were at the height of their popularity with “Rivers of Babylon”/”Brown Girl in the Ring,” which became the second-biggest selling single in U.K. chart history. “Rivers of Babylon” also was Boney M.’s only U.S. Top 40 hit. Boney M.’s album, Nightflight to Venus, also topped the U.K. charts. In October 1978, “Rasputin” became another U.K. Top Ten hit, followed by the seasonal chart-topper “Mary’s Boy Child”/”Oh My Lord,” which became the fifth-biggest selling single in U.K. history. In March 1979, “Painter Man” hit the U.K. Top Ten, followed in May by “Hooray! Hooray! It’s a Holi-Holiday.” In September, the album Oceans of Fantasy hit number one. Their music continues to sell well in Europe, with a compilation hitting the U.K. Top Ten in 1994. Farian went on to create the late-’80s dance sensation Milli Vanilli. ~ Stephen Thomas Erlewine

The group has Anthea Farrell and Maureen Laurens, which were for many, many years the leading ladies in Boney M. ft. Bobby Farrell. Together with Becky Bell (American Singer who had hits in the ’90s) they’re together the Bobby Farrell Ladies. One year after Bobby died, Orlando replaced Bobby Farrell. The group is bringing all the Boney M. Hits and is really succesfull.