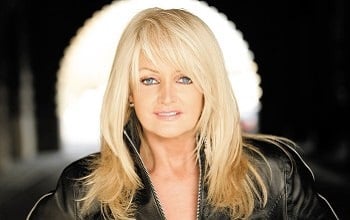 Bonnie Tyler (GB)
Holding Out for a Hero, Total Eclipse Of The Heart, It’s a Heartache

Before her well-known collaborations with Meat Loaf producer Jim Steinman, Welsh-born singer Bonnie Tyler (born Gaynor Hopkins) performed off and on in her homeland with the R&B band Mumbles; nodules on her vocal cords prevented her from singing full-time until 1976, when she underwent an operation to have them removed. The surgery left her with a raspy, husky voice that proved an effective instrument and drew notice from writer/producers Ronnie Scott and Steve Wolfe, who became her managers. Tyler scored a number three hit with their “It’s a Heartache” in 1978, but became dissatisfied as the two attempted to steer her into country music. When her contract ran out, she signed with CBS and sought Steinman out, hoping for material with his trademark epic sound. She got it with the ballad “Total Eclipse of the Heart,” which was recorded with E Street Band members Max Weinberg on drums and Roy Bittan on keyboards, plus guitarist Rick Derringer and backing vocalist Rory Dodd. The song spent four weeks at number one on the Billboard charts and helped the LP Faster Than the Speed of Night sell over a million copies and debut at number one in the U.K., where the title track also became a hit.

Tyler then recorded “Holding Out for a Hero” for the blockbuster Footloose soundtrack, which to date has remained her last major success. She went on to work with Todd Rundgren and Desmond Child and recorded the European hit album Bitterblue in 1991 for a German label, which featured contributions from Nik Kershaw, Harold Faltermeyer, and Giorgio Moroder. In 1996, she released Free Spirit on Atlantic Records to little attention. With her popularity still high throughout Europe, Tyler continued to record albums, including 1999’s All in One Voice, 2004’s Simply Believe, and 2005’s Wings. In 2012, some seven years after her last release, Tyler announced that she was recording a new album in Nashville. The country-rock-inspired Rocks and Honey appeared in early 2013. Prior to the album’s release, Tyler also announced that she would be the U.K.’s entry in the 2013 Eurovision Song Contest. ~ Steve Huey