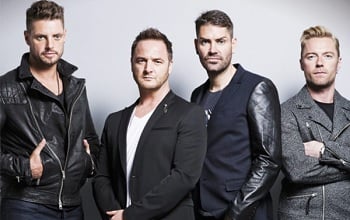 Boyzone (IE)
No Matter What, Everyday I Love You, Love Me for a Reason, Picture of You, I Love The Way You Love Me

Boyzone eventually made a comeback in 2007, originally intending to just tour. They were put together in 1993 by Louis Walsh, who is also known for managing Johnny Logan and Westlife. Before even recording any material, Boyzone made an appearance on RTÉ’s The Late Late Show. Gately died on 10 October 2009 of natural causes while on his holiday on the Spanish island of Majorca with his civil partner, Andrew Cowles.

In 2012, the Official Charts Company revealed the biggest selling singles artists in British music chart history with Boyzone currently placed at 29th and the second most successful boyband in Britain. To date, Boyzone has released four studio albums and seven compilation albums.

Ask the price of Boyzone and availability for free info@room5.fi