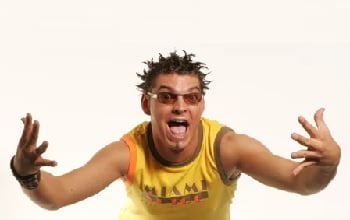 Danzel
Pump It Up!, Put Your Hands Up in the Air!

“You Are All Of That” was Danzel’s first single, released by Ministry Of Sound in late 2003. It sampled Sylvester James’s Hi-NRG Classic hit “Do you wanna funk?” It reached number 69 in the UK Dance Chart. The single was not promoted outside the UK and Ireland, where it peaked at Number 85.

“Pump It Up!” was Danzel’s second single, remixing a late 1990s hit originally recorded by the Black & White Brothers. The single was released by Ministry Of Sound UK and did relatively well, selling more than 500,000 copies worldwide.[citation needed] In the singles’ charts it reached number 11 in the UK, number 7 in Germany, number 11 in France and number 9 in Australia. In the more specific dance and club charts it did even better, becoming number 2 in the UK, number 3 in Australia and number 15 in the US.

Danzel’s fourth single, “My Arms Keep Missing You” was released again by Ministry Of Sound, in the summer of 2006. It was a cover of the 1988 single with the same name by British singer Rick Astley, done with British DJ F.R.A.N.K. The single did not perform as well as “Pump It Up!”, charting in Australia, peaking at the position Number 74. It was also released in the Spain, but only as a physical release. The single had a minor success in the clubs of Ibiza. In Spain, the single was included in a summer compilation album called Disco Estrella Volume 9, which was released by the Spanish record label ValeMusic Spain, a subsidiary of SonyBMG Spain. The single was released in late 2006 in the UK, and featured in the UK Dance Chart, rising to Number 9.

Ask the price of Danzel and availability for free at info@room5.fi