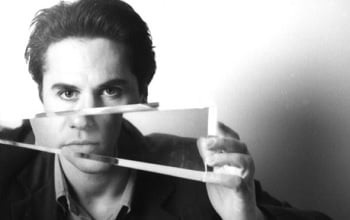 Born Paul Mazzolini on February 18, 1960 in Beirut, Lebanon, to a family of an Italian diplomat and an American singer, Gazebo spent his early years globetrotting around the world with his parents. As a teenager, he played in a rock band; later he studied the classical guitar in Paris for two years and spent some time in London, where he was briefly interested in the punk scene. Upon his return to Italy in the early ’80s, he recorded his first song, “Masterpiece”, co-written with his friend Pier Luigi Giombini (who would become his regular songwriting partner). Issued as a single, it became a big success in Italy in 1982 and only missed the number one spot in the charts by a whisker. A year later, Gazebo released his self-titled debut album, containing the hit song “I Like Chopin”: a number one in Italy and 15 other countries that sold eight million copies around the world and contributed to the popularity of the nascent Italo-dance style.

The singer essayed a different stylistic approach on his second album, Telephone Mama (1984), but the record still sold very well. Striving for more independence, in the mid-’80s Gazebo founded his own company, Lunatic S.r.l., which was followed by Cresus Enterprises S.n.C. in 1990 (the latter promoted and distributed the production of Lunatic). In the interim, the artist issued three more albums, Univision (1986), The Rainbow Tales (1988), and Sweet Life (1989). The last was composed, produced, and arranged by Gazebo himself, and featured a new cover of the famous song “Dolce Vita” which he’d written for Ryan Paris back in 1983.

In 1997, Gazebo merged Lunatic S.r.l. and Cresus Enterprises S.n.C. into a new company, Softworks. In 2000, he combined his two previous releases Portrait (1994) and Viewpoint (1998) into a special double-CD issue, Portrait & Viewpoint, that included new covers and remixes of his greatest hits and a previously unreleased follow-up to “Masterpiece.” ~ Yuri German