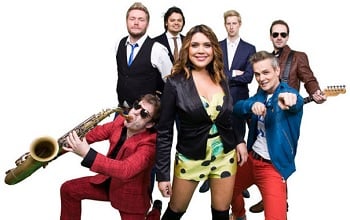 Hermes House Band (NL)
Country Roads, I Will Survive, Que Sera Sera, Those Were the Days, Live Is Life

The Hermes House Band, established in 1984 by members of the Hermes fraternity/sorority in Rotterdam, Netherlands, have released more than twenty five albums and singles.

The band became famous in 1994 in both the Netherlands and Belgium, with their cover of the hit single, “I Will Survive”; the song has since sold over 2.5 million copies.[citation needed] In 1998, the single became a hit in Germany, and singer Judith Ansems was asked to promote the song there. It became also a hit in France, reaching first place in the charts, as it was the anthem of the national football team, which won the World Cup that year ; song is still today associated with World Cup 98 victory in French popular culture. The band got a local recording contract with Polydor and alongside Ansems, former singers Jop Wijlacker and Robin Maas were asked to record other singles such as “Country Roads” and “Que Sera Sera” in Germany under HHB International. Several of these were also released in the Netherlands.

Their biggest hit in the United Kingdom was their cover of “Country Roads”, released shortly before Christmas 2001, which peaked at #7 in the UK Singles Chart, remaining in the Top 10 for five weeks.[2] It reached number 1 in the Scottish Singles Chart in December 2001 and again in January 2002.