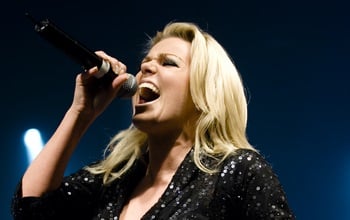 Infernal (DK)
From Paris to Berlin, Keen on Disco, I Won’t Be Crying

Although they began life in 1997, it wasn’t until 2004 that Infernal broke through across Europe with the retro disco hit “From Paris to Berlin,” with the album of the same name going on to sell more than a million copies globally.
The band started life as a trio consisting of Lina Rafn, Paw Lagermann, and Søren Haahr, who released the single “Sorti de l’Enfer,” followed a year later by the group’s debut album, Infernal Affairs.

In 2000 Haahr left Infernal, but the other two have carried on, releasing another studio album and remix sets. In 2004 they really broke through with the simple but infectious dance song “From Paris to Berlin” — they had enjoyed success at home before, but in 2005 the song went Europe-wide, even hitting the Top Five in Britain (there was even a re-recorded version, “From London to Berlin,” to celebrate England in the 2006 World Cup). A follow-up was never going to be easy, but they decided on a cover of Laura Branigan’s ’80s hit “Self Control,” which charted in six countries. However, their popularity then seemed to fade, with another single only charting in Denmark. In 2008 Infernal released a new album, Electric Cabaret, through the band’s official website. ~ Chris Nickson

Ask the price of Infernal and availability for free at info@room5.fi