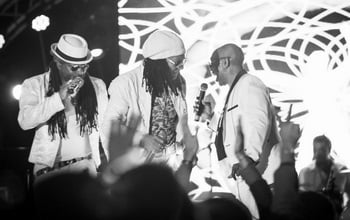 Londonbeat (UK/US)
I’ve Been Thinking About You, A Better Love, You Bring on the Sun

During the ’70s, Jimmy Helms and Jimmy Chambers released solo material on the Pye and Cube labels, while George Chandler, a member of Olympic Runners and Gonzales, was part of the RCA and Polydor rosters. Songwriter and producer William Henshall, aka Willy M., rounded out the first lineup. Signed to David Stewart’s (of Eurythmics) Anxious label, Londonbeat released their debut album, Speak, in 1988. It was more successful in the Netherlands than in the U.K., though “9 A.M. (The Comfort Zone)” did reach the Top 20 of the U.K. singles chart.

In the Blood, the 1990 follow-up album, was broadly popular due to the single “I’ve Been Thinking About You,” a number one hit in several territories, including the U.K., U.S., and the Netherlands. From there, however, the group slid out of the mainstream. Two additional albums for Anxious, Harmony (1992) and Londonbeat (1994), neither intensified nor sustained Londonbeat’s momentum.

After they competed in the 1995 Eurovision Song Contest, the members separated, but a new lineup took shape in 2003 and recorded for the Coconut label. This period included the albums Back in the Hi-Life (2003) and Gravity (2004). Roughly a decade later, Londonbeat contributed to two songs on Deodato’s The Crossing, and they performed into the late 2010s. ~ Andy Kellman