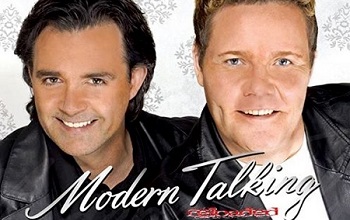 German dance-pop duo Modern Talking were formed in Berlin in early 1983 by Dieter Bohlen, then a composer and producer employed by the Intersong label; teaming with vocalist Thomas Anders, they soon began work on their first single, 1984’s “You’re My Heart, You’re My Soul.”

Modern Talking’s debut LP, succinctly titled The 1st Album, followed a year later on the heels of their second single, “You Can Win If You Want“; the duo’s sophomore effort, Let’s Talk About Love, appeared in late 1985, launching the smash “Cheri Cheri Lady.”

With 1986’s Ready for Romance, Modern Talking scored their biggest hit with “Brother Louie“; however, after 1986’s In the Middle of Nowhere, tensions between Bohlen and Anders reached a boiling point, and following the release of their fifth LP, Romantic Warriors, Bohlen assembled a new project, Blue System.