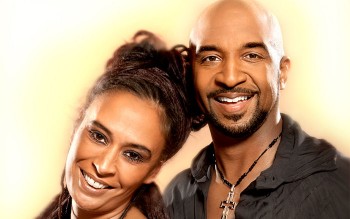 Ottawan (FR)
Hands Up (Give Me Your Heart), D.I.S.C.O, Shalala Song

Despite its Canadian-sounding name, the disco duet Ottawan, comprised of two Caribbean-born singers Jean Patrick (born on April 6, 1954) and Annette (born on November 1, 1958), was a brainchild of the French producer team Daniel Vangarde and Jean Kluger.

Vangarde who also worked with Dalida, the Gibson Brothers and Sheila & B. Devotion discovered Jean Patrick in one of the Parisian clubs where the latter performed with his band Black Underground. The producers decided to change the name of the band, reportedly they came up with the idea of the present name on their way back from Canada.

ttawan’s catchy debut single “D.I.S.C.O” was a massive dance hit around Europe in 1980 and even made it to number two in Great Britain, staying in the charts for 18 weeks. 1981’s “Hands Up” was almost as successful, reaching number three in the UK and logging on the charts for 15 weeks.

Shortly thereafter Jean Patrick quit the band and organized a new duo, Pam ‘n Pat, with whom he scored another European dance hit, “To Be Superman” in 1982. In recent years, Patrick re-organized Ottawan and toured Europe with his new partner, Tamara. ~ Yuri German