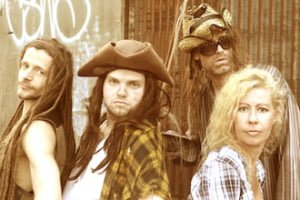 Bursting out of the barn in 1994 with their Eurodance-bluegrass novelty “Cotton Eye Joe,” the Swedish pop group Rednex became one of the biggest chart-toppers in Europe in the ’90s before switching up their formula and riding nostalgia into the 2000s.
The act was formed by producers Patrick Edenberg, Janne Ericsson, and Orjan Oberg in 1994, recruiting a quartet of Swedes for the country-folk dance crew. The original lineup included vocalist Mary Joe (Annika Ljungberg), vocalist/banjoist Ken Tacky (Arne Arstrand), and violinists Bobby Sue (Kent Olander) and Billie Ray (Jonas Nilsson). Creator Edenberg produced as Pat Reiniz with the alias M-Up. Rednex unleashed the fiddling hoedown “Cotton Eye Joe” — a cover of “Cotton-Eyed Joe,” thought to be a pre-Civil War plantation slave song — and it became a massive hit, topping the charts for weeks in Norway, Switzerland, Germany, Sweden, Austria, the United Kingdom, and New Zealand. They would become a one-hit wonder in the United States, peaking on the Billboard singles chart at number 25 in 1995. Edenberg left soon after the single’s release, replaced by BB Stiff (Urban Landgren) for the promotion of the debut album, Sex & Violins.

After a series of singles, Ljungberg left the group to pursue a solo career in 1996. Arstrand left in 1997 to focus on his prog-metal band Explode. Ljungberg’s spot was filled by Whippy (Mia Lofgren) in 1998. The updated Rednex lineup released the group’s sophomore effort, Farmout, in 2000. “The Spirit of the Hawk” became a moderate hit in Germany, but a different direction was decided for Rednex. Edenberg decided to shift the group’s focus toward live entertainment and not just pushing singles, which led to a total rehaul of the lineup. Lofgren, Olander, Nilsson, and Landgren were all replaced, bringing in Scarlet (English vocalist Julie-Anne Tulley), Dagger (Swede Anders Sandberg), and Joe Cagg (Roy van der Haagen) and Jay Lee (Jean-Paul Engeln) from the Netherlands. A compilation album, The Best of the West, was released in 2002. It included updates on past hits and a new track “The Chase.” Roster changes continued to plague the group, with the two Dutch members leaving in 2003. They were replaced by Ace Ratclaw (Tor Penten) and Boneduster Crock (Bjorn Scheffler). A year later, Tulley parted ways with Rednex.
A decade after leaving the group, Ljungberg returned to the fold. She switched Scheffler for her husband, Jens Sylsjo, and Sandberg for Anders Lundstrom. Scheffler and Sandberg would later recruit Tulley, van der Haagen, and Penten for a touring offshoot, dubbed Rednex Tribute.

The official Rednex trio continued to perform, release singles, and participate in multiple European music competitions until 2009 when control of the Rednex reverted to the band’s founders after years under Ljungberg’s management. She was released, along with Lundstrom and Sylsjo. Conveniently, the Rednex Tribute lineup was still active and they became the official Rednex. In early 2009, they released a single for a new scheduled album, but the effort wouldn’t materialize due to low sales. Tulley left the group again, replaced by Rednex female vocalist 4.0, Dakotah (Nadja Flood).

By 2012, the repeated lineup changes led to a natural conclusion for the band. They announced that Rednex would draw from a pool of associated musicians moving forward, creating incarnations and spin-offs with their historically female-vocalist-plus-three-male-performers formula. Subsequent singles like “Racing” and “The End” arrived in 2012. A three-song EP, Drinking & Pub Songs, was also issued. At the end of the year, the Rednex brand made its way to Oceania with the creation of the Rednex NZ franchise, which performed for the Australia and New Zealand markets.

Over two decades after its formation, Rednex released the single “Innit for the Money” in 2016. ~ Neil Z. Yeung

Ask the price of Rednex and availability for free at info@room5.fi