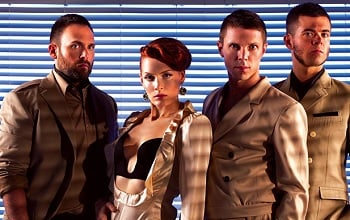 Scissor Sisters (US)
I Don’t Feel Like Dancin’, Fire with Fire, Only the Horses

A genre- and gender-defying mix of rock, pop, and dance inspired by burlesque, drag queens, and glam rock, New York’s Scissor Sisters made a splash in late 2003/early 2004 with their neon-bright reimagining of Pink Floyd’s “Comfortably Numb,” the B-side to the band’s first single, “Electrobix.” The song made quite a name for the band, which featured singers Jake Shears and Ana Matronic, keyboardist/bassist Babydaddy, guitarists Del Marquis and Derek G, and drummer Paddy Boom: along with becoming the calling card that got the band signed to Polydor in the U.K., “Comfortably Numb” was heralded Single of the Month by Dazed and Confused and Jockey Slut magazines, named an Essential New Tune by Pete Tong on Britain’s Radio 1, and also received considerable play by DJs including Felix da Housecat and Tiga. Scissor Sisters (whose name is slang for a lesbian sex act) came from the cutting edge of New York’s nightlife and gay culture, incorporating elements of burlesque and drag shows, as well as performance art, into their theatrical live shows. This was the perfect setting for their music, which gleaned the best of Elton John, the Bee Gees, the B-52’s, David Bowie, and many other artists with a campy sense of humor and impeccable style.

After proving themselves one of the city’s most dynamic live acts, Scissor Sisters won over British and European audiences on a tour early in 2004 that coincided with the release of their self-titled debut album. That March, they returned stateside for a South by Southwest gig with Junior Senior and the B-52’s before returning to the U.K. to tour with Duran Duran in support of the “Take Your Mama Out” single. The band continued to have a busy spring and summer, launching its first U.S. tour in May — coinciding with the stateside release of Scissor Sisters — and returning to Europe in June and July. These dates included two gigs supporting Scissor Sisters’ spiritual and musical godfather, Elton John, as well as appearances at festivals such as Glastonbury, T in the Park, Roskilde, and the Montreux Jazz Festival. Late that year, Scissor Sisters were nominated for a Grammy for Best Dance Record for “Comfortably Numb.” The band kept busy with touring and producing remixes during 2005, and returned with new material in fall 2006, when the single “I Don’t Feel Like Dancin'” hit number one in England. The band’s subsequent album, Ta-Dah, also topped the charts in Great Britain. In 2008, Paddy Boom left the group and was replaced by Randy Schrager. After completing and then scrapping an entire set of songs, Scissor Sisters worked with producer Stuart Price for their third album, Night Work, which was released in 2010 and preceded by the power ballad “Fire with Fire.” Guests such as Pharrell Williams, Calvin Harris and Azealia Banks gave an edge to 2012’s Magic Hour. ~ Heather Phares